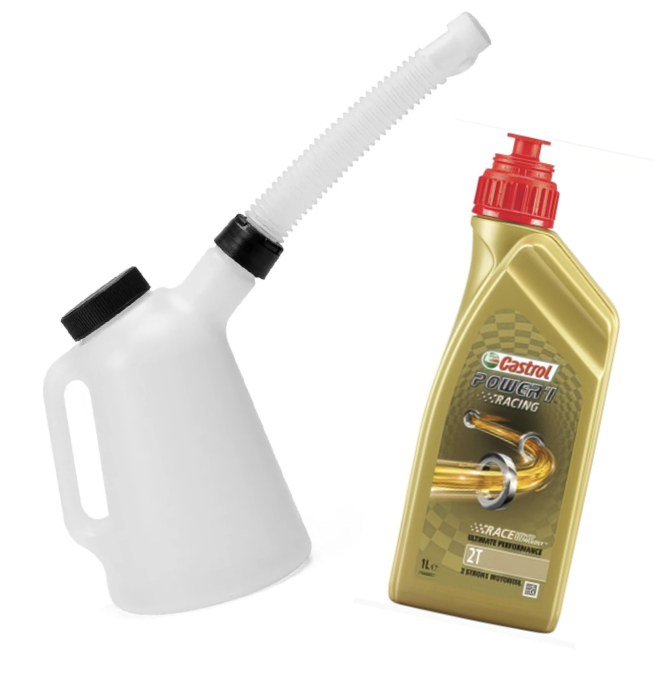 What is the best ratio for my scooter? How much oil I have to add to fuel? Does oil/fuel premix affect performance? Can I ruin my engine if I get the ratio wrong? Does the fuel and oil ratio affect the fuel consumption? What happens if I remove my oil pump? What happens if I put too much oil in the fuel?

Example of questions I have received while tuning or repairing the twostrokers. I will try to explain below what are the main concepts to keep in mind and share some experience while working on two stroke racing engines.

What does fuel oil ratio mean?

Some examples of calculation:

How much oil is right?

The engines that use oil pump cause no worry. Some do allow oil ratio adjustments on pumps but as for the bike user, there is not much for to worry about other than to keep the oil and fuel tank filled.

Oil has the purpose of lubrication, fuel has the purpose of burning but also cooling the piston head. How to decide what is right for my bike? Look at your bike manufacturer instructions and look at the oil producer suggestions. Between 25:1 and 40:1 for racing engines is about right.

Yes and no. By experience I would say there is not much difference when running engine with 20:1 or 40:1 premix as long as you’ve got your jetting right after choosing the premix. If you go to extremes (too much or too little oil) then you will see reduced performance or end up with engine seizure (see below). So, for racing engines it is safer side to get a bit more oil (around 25:1 to 35:1 premix) and then run proper jetting on a dyno.

Keep in mind that oil will also create coating on the cylinder and will help the piston rings seal better for better compression.

What happens if I put too much oil?

Theory is that your engine may struggle to start and perform poorly. Also too much oil will prevent your engine to cool down and will result in running lean.

Out of interest I once tested 20:1 mix and also 5:1 mix right before the top end teardown. We did 20 minute run with both premixes, without changing the jetting. 20:1 mix resulted no difference other than engine running a few degrees hotter than usual. No difference on a spark plug.

5:1 mix resulted in a lot more smoke from the exhaust than usual. Engine running 90 degrees celsius at the end of the 20minute run (instead of 65-70 degrees celsius as normally). But no notable difference in lap times (more likely my son being tired at the end of this). When looking at the spark plug it had much more more carbon buildup. And engine teardown showed the piston having a lot more carbon buildup on it than usual, no damage to the piston or the cylinder head with no signs of the engine running too lean.

In summary, I would still say that that too much oil for the engine is not healthy and eventually you would probably end with fouled spark plug rather than failed piston or stuck piston rings.

What happens if I add no oil or add too little oil?

Too little or no oil and you will sustain internal engine damage. By accident, I have run a two-stroke trimmer on pure petrol with no oil. The engine run for about 20 minutes and then seized. Had to replace the entire top end with, cylinder, cylinder head and piston as a result.

Same will happen if you put too little oil. Engine will have no sufficient lubrication and overheat due to high metal to metal friction.

What happens to the piston you can see in this article: Two-stroke piston troubleshooting

Hard to suggest. Today’s mineral oils are of high quality. I can suggest that use what your bike manufacturer suggests.

Theory is that synthetic oils would be slightly more expensive but generate less burnt carbon or residue on the piston and inside the exhaust system.

There are loads of information concentrated on this page, which I hope will help you on your way to make your engines faster.